59 entries in the Fire Glossary beginning with "S"

The basic wildland fire training course given to all U.S. firefighters before they can work on the fire lines.

An area cleared of flammable material used for escape in the event the line is outflanked or in case a spot fire causes fuels outside the control line to render the line unsafe. In firing operations, crews progress so as to maintain a safety zone close at hand allowing the fuels inside the control line to be consumed before going ahead. Safety zones may also be constructed as integral parts of fuel breaks; they are greatly enlarged areas which can be used with relative safety by firefighters and their equipment in the event of blowup in the vicinity.

Heavy-duty tarpaulins folded or rolled for quick deployment to cover personal property subjected to possible water or other damage during firefighting.

Chainsaw crew, may also include faller" or "feller" who is qualified to cut down trees or snags perhaps while the tree or snag is burning.

Self Contained Breathing Apparatus, or air-pack, worn by firefighters to protect against breathing toxic fumes and smoke, or where the air has insufficient oxygen. Often incorrectly called oxygen mask" by laypersons. Typically of open circuit style with a supply of compressed air where expired air is exhausted, rather than closed circuit where it is filtered, re-oxygenated from compressed oxygen, and inhaled again which is used where an air supply is needed for an extended period (up to four hours).

Steps taken at or near an emergency scene to reduce hazards and prevent further injuries to workers, victims or bystanders.

Ready-made opening in roof that can be opened for vertical ventilation.

Search and rescue (or SAR)

Entering a fire building or collapse zone for an orderly search for victims and removal of live victims. Becomes recovery" if victims are not likely to be found alive.

Any fireline constructed at a distance from the fire perimeter concurrently with or after a line already constructed on or near to the perimeter of the fire. Generally constructed as an insurance measure in case the fire escapes control by the primary line.

A physical or operational division of an incident; an area supervised as a branch in the Incident Command System. A typical system for structure fires names the front" of the building "sector "A" and continues clockwise around the building (B, C, D) with interior sectors denoted by the floor number (1, 2, 3, etc.) . A "rehab" sector is one example of an operational division at an incident where personnel are assigned after strenuous work in another sector.

The amount of hose a single firefighter can pull off a hose wagon or pumper truck and carry toward the fire.

Initial evaluation of an incident, in particular a determination of immediate hazards to responders, other lives and property, and what additional resources may be needed. Example:Two-story brick taxpayer with heavy smoke showing from rear wooden porches and children reported trapped.

Pre-configured tank, pump, hose for attachment to a logging skidder (large 4-wheel-drive tractor with a dozer blade, winch or grapple) to be carried to a fireline.

A small water pump and tank that can be temporarily mounted on a pickup or other truck.

Fire spreading outside the boundaries of a control line.

Humorous pejorative term for those believed to be doing less work than you. Heli-slug" for helitack, "camp slug" for fire camp support personnel, "engine slug" for engine crew member, etc.

Generally accepted to be fire hose 3 or less in diameter.

(1) part of a fire alarm system that detects and signals presence of smoke; (2) self-contained household device for same purpose as (1) but with its own noisemaking device.

Powerful fan for moving large amounts of air and smoke as part of ventilation task while fighting fire in a burning structure. May be operated by electricity or gas motor for positive or negative pressure ventilation.

Building structure which isolates escape stairwells with relatively fireproof walls, self-closing doors, and positive pressure ventilation, to prevent smoke or fumes from entering the stairwell during evacuation of occupants during a fire or other emergency.

Colloquial term for a wildland firefighter. Now mostly archaic, except in Minnesota where state Department of Natural Resources firefighters are officially known by that name.

A specifically trained and certified firefighter who travels to remote wildfires by fixed-wing aircraft and parachutes into a jump spot - that may include trees - close to the fire.

59 entries in the Fire Glossary beginning with "S" 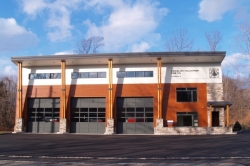